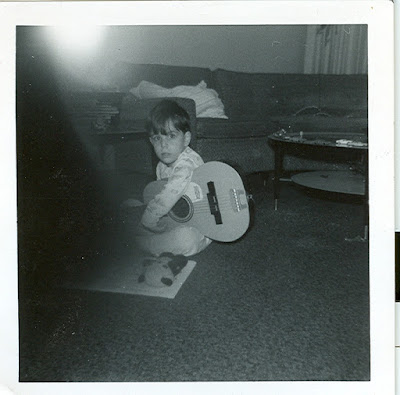 So how did it all start? -I was like any other little kid at age 4 - playing with toys watching cartoons,living in a small tiny apartment with my mom, dad & three sisters who all shared a room. Then one day it happened.. I was sitting in front of our old black & white TV back when you had to get up and change the channels by hand playing with Matchbox cars. All of a sudden it came on TV . An old clip of the Beatles from Ed Sullivan, obviously a repeat or clip since I was not born when it happened- But it came on the black & white TV but I swear I saw it in full technicolor!
I am not shitting you! -

As years went by I looked for color footage of that clip -but there are none- yet I saw it in full blown color -She loves you yeah yeah yeah!!- They say music is made of colors or can make you feel them (as any LSD user could tell you ) -
But I never dropped acid ..never at age four & not when I got older either as my generation a decade after the 60s -growing up on first wave Punk rock already could see the damaged ruins of what was left of what people used to call hippies. Even as a little kid I'd see them roaming around muttering to themselves talking incoherently -their brains fried , burnt out ,some asking for money on the street -But not all of them.


Some were musicians like one of the guys from Country Joe & The Fish who lived in the apartment above us with his mom in the Fairfax district- Besides some of those Hippie girls looked damn good to me too even though I was a little kid.The first song I wrote at 7 years old was called ‘Bees Make Honey’ (A pretty bluesy title when you think about it)
It had to be rock n roll-Them girls in those fringe Native American jackets ,sexy blouses and tight bell bottom jeans with those big 70s looking sunglasses-- (just like the girls in the movie 'Billy Jack' or portrayed in 'Almost Famous') First time I ever felt anything bout girls was looking at them hippie chicks standing around Nate's Milk store(Clockwork Orange anyone ?) & hanging around with my older sister a little later down the line when I hit 10 years round our home -mind you I was a kid --but remember -I saw it all & felt it in color

There had to be something in that acid that tapped into your mind where walls could melt & colors could explode within the senses . I felt that.
I hallucinated without dropping drugs.-I still can- It was the innocence of an open mind looking at the world through childlike eyes that made me see & feel it all in color. Ever since that day it was over -I was fucking ruined but in a great way - I never looked back ,for I knew I was born to play music before I even did it ..four years old mind you! ..I knew my calling for better or worse & found out much later that music -The cause & effect can affect people in a profound way.

I wasn't the only one -I'm sure you all can remember that first blast,where music for you made you feel something ,became your friend in sorrow, wild with Saturday night rebellion, sitting in the dark in your room looking at the blue lights on the stereo as the needle hit the vinyl ,playin' guitar - or how it made love & sex all that much better, - a way of life. You & I we could confide in music cause' rock n roll music was a good listener even though we were the ones listening-cause' it seemed to say everything you felt & reflect it right back at you..

And if you are younger & what the media calls today a 'millennial', whatever kind of music reaches out and makes you have no recourse & just belong to some exclusive thing inside your soul, I say its good. You gotta let it happen.Let it grab hold of ya'.
Its good to be out of control and tattered in ruins.
-I am in ruins- rock n roll ruins,
AND I LOVE IT!!