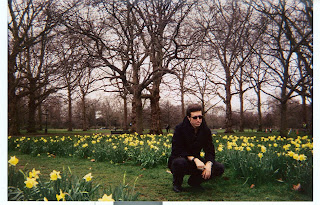 The Story of Jesse Navarro is one which has baffled people for Decades
Which often leads to the Question-“Just who is Jesse Navarro?”
People have debated for years as to what this man is and where he came from, Ask one person they may answer He An Artist without equal, ask another they will say he is nothing more then a Hobo. Another may insist he is a gas station attendant with the rebel flair of a young Johnny Cash roaming Beale street in Memphis TN.every Sat night, Ask another they swear he is a A man in the upper echelons of society hob knobbing with only the wealthiest scenesters of the world. Others will adamantly argue he is eccentric recluse Hounded by a bevy of Playboy bunnies after a night to remember at the Hugh Hefner mansion
Well good people may I implore he is all these things and a few more .The Story of This mover and shaker held Top secret for decades for fear of all who it would incriminate can now finally be told by me ‘Sir Lawrence Gridlock the third of London’.- A Jesse Navarro expert.

The Story begins in a small shack in Costa Mesa ca. where Jesse was Born, He at age seven after being expelled from the Art institute for drawing caricatures of his teachers Decided riding the rails would be a better way of life. It was on July 4th he packed a pillow case with a Harmonica & sketch book and headed for St Louis. A curly haired Man with a guitar said his name was Woody. He took the young artist under his wing and would show him the freewheelin’ ways of Hobo life only If Jesse gave him his harmonica. So Jesse did and off they went. Begging door to door, rowing a raft down the mighty muddy Mississippi river- Charming the Middle class tattooed Rockabilly girls in Virginia, smoking cheap cigars under the statue of Robert E Lee- Woody would play & sing .Jesse would dance on a buckboard .They billed themselves ‘The Human Monkey & Cosmic Organ Grinder’. When the money dried up and they were chased from town to town, the seven year old Navarro would trade his artwork for Food & Lodging .People often scoffed at his art until he left. Where then they would promptly steal his ideas. And take credit & sell them for a ton of money years later.

When Jesse became a young man Woody then said to him “Jesse you must go it alone. I’ve taught you all I know bout’ the freewheelin’hobo life”
He bid his Protégé’ farewell. Jesse promptly boarded a ship for Paris. He encountered a woman ‘Beatrice Le Mont’- a beautiful Art gallery owner who took a liking to his art & his Buddy Holly Glasses. She introduced him to the high life of Wild party’s debauchery and the Jet set. It was Here his Art was praised by The Famous. Yet other artist refused to acknowledge his work (Which they later stole) and begged him to be more like Andy Warhol- so he signed their faces and said “You’re my creation “and left.
Beatrice Lemont’ loved him& their rumored romance was Legendary - but The roaming artist Navarro left France &headed down to Memphis where he opened up a classic gas station car garage to employ tattooed pin up models. They fixed his Hot Rod and he took their photos. And of course there was that infamous rumor now referred to as ‘The Poker game Incident At the Playboy mansion’
where Jesse and a bevy of Playboy bunnies and swingers returned to relax after a Strip poker game in the middle of Sunset Bolouvard,whilst Navarro passed out free Clothing from his Custom Clash clothing line & cigars to stunned onlookers.

The incident was kept quiet with hush money supposedly paid by none other then ‘Beatrice Lemont’ of France’ who had friends in high places She called the incident “A work of Art & theatre at is best!” It was a few weeks later on a hot summer night that he encountered ‘The Ghost of Howard Hughes’ and simply disappeared. The story gets blurry from here some even state today Jesse Navarro didn’t even really ever exist at all& is a folk tale invented by none other then a old man named ‘Woody the Hobo’ who resides in Bakersfield California in a resting home. – yet Jesse Navarro’s Art ,Photos & Short Films turn up from California to New York, Europe & all over world, leaving fans ecstatic & would be imitators plagiarizing his work.

.Private investigator ‘Doctor P.T. Clarke of Norfolk Virginia’ finally closed the case. When asked by a frantic news media “Does this Jesse Navarro exist?” He simply stated - “Yes my friends he does exist In all of his Photos, Album covers, short films, music videos& drawings that go against the grain of the Mainstream. Deep Inside the souls of the Underdog, the Harassed, The loved, the un-loved and those that dare to be real in a false world. Yes My Friends That’s where you’ll find Mr. Navarro –In The Human heart
Where true Art lives and breathes for all to see that care to look.”

Written by Michael Ubaldini
Copyright library of congress 2010(this is a Bio I wrote for Artist Jesse Navarro of Custom Clash Art who has lent his skills to my album covers & Tour Posters along with adding his skill to my music video/Promo films)
cannot be reproduced in any shape or form or fragments without permission
Posted by Michael Ubaldini Ramblings at 8:40 PM No comments:

Day started off by wakin' up and giving thanks to the man above for this thing called life.
Ate Cheerios,Drank Coffee,Talked to my Chick, wore a beat up shirt cause it looked cool.Broke out the ol' Gibson 175 white hollow body-Very minimal overdubs-The album was recorded the real way-No click Tracks or Tracking- no building&layering things-this album is ready to tear that all down.Just 4 people in a room,layin' em' down and havin' a ball playin' and a singin'
It's the complete bastard brother of my last album-Kinda Ying & Yang.
I have to keep movin'&Ramblin'& challenging myself as an artist- Gotta keep changin' things up-
Don't like reality stars on a red carpet
They do not belong there.
Red carpets are for the Brandos,Garbos,Pacinos&Streeps of the world-real artists....I never liked computer paintings.I dig the folks who use a real brush and sculpt by hand....Thats what this record will be all about...With a heavy dose of whisky,wimmens and Bag ladies.
Blue Yodel Blue Yodel Blue Yodel.....Jimmy Rodgers spirit was there.


PS -
If ya can't write a good song in under fifteen to thirty minutes.... ya gotta find another line of work....... Reality TV?
Posted by Michael Ubaldini Ramblings at 12:06 AM No comments: