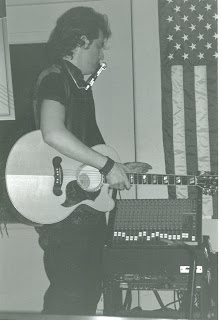 Played the Sawdust Fest today had a great turn out And a solid set of music...Ran into some ol' friends etc...Lots of great people & Artists hangin' out..of course there are are the few pompous ones that linger ..but yer gonna get that.... I let that crumple under my shoes..Had one of the best nights last week At Lee Mallorys Poetry reading feature of Michael Miller ..did set of music and played some music behind Mr Millers Poetry... Plus A great book he has released called 'College town' I recommend.
A moving night and standing ovation to my Set of songs ...a real standing ovation from the heart.. you find out quick in this world who really cares once you've been around the block a few times .

Also my Last 'OUTLAWS OF FOLK MUSIC SERIES' has been the best one so far with AUSTIN LADD ROBERTS & THE FALLEN STARS playing the show with me... MY NEW GROUP MICHAEL& THE LONESOME PLAYBOYS- gearin' up soon for the New record release...TBA...

Note of wisdom- NEVER LET, OTHER 'ARTISTS', SECURITY GUARDS, OR CLUB OWNERS TELL YOU WHAT MUSIC TO PLAY- OR TRY TO BE SOUND MEN ...
They know better after all ...Music.. They've played it for years haven't they?

Present your vision in-spite of these types... They know nothing about your soul.. If they think they do...who really cares...Ya Dig?

I have a train to catch..Bout to have coffee with a desolate Rust repairer