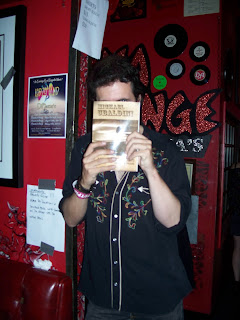 But no one knows the time the hour the day that will come like
a theif in the night
Ya' got that right
I aint worried bout  a thing man cause I'm driving and the two lanes are vanishing behind me in this..
Year In Review
I can see reflecting in highlights of the past headlights ...
Writin' and a recordin'
travlin' through a locked window
railroaded by monkeys
hobblin' like Crutch Daddy Jones
Left and Right political noise of a wash
people using bad happenings ..events ..shootings viloence
exploiting the innocent lambs who were turned into Gods angels
Using that tragedy for their own political purpose
sometimes left aint right and right aint left
Its only propaganda and an evil theft
and to all who chant "Which side Are you On?"
I say "the side of the road no one travels on- with the outcasts from the outcasts -the meek vagabonds"
For human beings always find a way to do harm and smile & kill
no matter what laws get layed accross the great divide they will....
swallow the plane to catch the bomb
swallow the bomb to catch the gun
swallow the gun to catch the knife
swallow the knife to catch the hammer
swallow the hammer to catch the nail
swallow the nail to catch the wood
swallow the wood to catch the stone
use the stone as an eye for an eye
I dont know why they swallowed the eye
perhaps sticks and stones too can make ya die
If theres a will theres a way And hateful will always try

I propose a toast to
(In a more uplifting note)
TO:
(trumpets blowing right about now)
Ingbar Swenson a rust repair salesman from Bolton l whisper street
Jesse & Frank James Colt 45 RPM- The 45 RPM
Clowns with mustaches
Giraffes with short necks
Leaders who tell the truth
elephants without trunks
Skunks that dont smell
Rats who share cheese
Monks who climb trees
wordsmiths and blacksmiths with long tooth combs and
Brides who dress in spike heels and carry flick knives

High moments from 2012.......
Getting the call from Dwight Yoakam and crew to open show for him with
Michael& The Lonesome Playboys ,
My Book 'Lost American Nights; Published in its 2nd edition by MOONTIDE PRESS (Thank you M Miller)
The GOE gigs
The EB Gigs
Cinema gigs
The Ronnie Mack Barn Dance gigs
Fitzgeralds & of Course without any further rambling
The on-going Outlaws of Folk music series & all the travlin' Songsters who swing by and spew out a song of 30 minutes of good hustle.

Typewriter Busted, I dusted ,Is now trusted and working again
write my songs on an old Underwood givin to me by the ghost of Kerouac,
(In a car with Hank Williams and Oscar Wilde no less)
While mutants and vultures trying to chomp souls and feed em to the lowest bidder surrounded me on a front porch down cross the Macon Dixon Line
headed straight into the sideshow damsel in a pink radiator dress ..however I did not comply as I borrowed a swift antique broom fom the local judge and flatly smashed his will and the feathered chamber of commerce birds into submission(Right here cue up the sex pistols)

Writing poem after poem , song after song ,riding the crest of the whirlwind
Ill see ya in the next chapter of year 2013
Thats my year in review ..Think it dont mean a thing?
Better read the lines in between
& awake from your nightmare and call it a dream
Theres a lot held in the glove box that to the naked eye can't be seen
On the driftwood of promise of some false hipster scene
Who will wear the right clothes
and pretend they know what it all means...'
Besides never trust a doner that wears bell bottom jeans
obscene

written by Michael ubaldini
copyright library of congress 2012
may not be used in any form without permission
Posted by Michael Ubaldini Ramblings at 3:00 AM No comments: