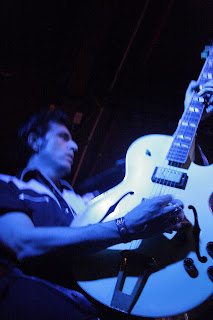 Rented Rehearsal Hall,
Lousy PA Solid State Amp rental
Other bands sounds coming through amp speaker,
Dirty carpets & A Soda machine that don't work..
Throwing together a song list,
Girlfriend calls and says Raccoons are having relations in her driveway
I am Reading my own rights
Lord Byron is floating overhead on a Mountain top of rubble Darkness is Beautiful with light when Byron Rights it-
Then Writes it.

The Set list we journey down through
Rummage through old time tunes for Licks& Kicks
Hippie Culture tells me The Weather Underground are all upper middle class rich folk
So was Abbie Hoffman... Pete knocked him off the stage in 69 ,
I think that sums it all up.

Back from daydream- Into next song Rustlin' & a singin' into my own microphone
The Others are dented and filled with Gob slobber
Gobbing a way for Punk bands of yesteryear to show their diggin' your band,
I step aside like Fred Astaire and avoid that belief
like a swirlin' top whizzer' from Rock em sock em' sock it to me robots of past glory

Next number Ray Price tune
Guitars & steel heaven Blues for the aged flowers cultivated by time
Television reality of phoniness can only mean more lack of privacy
Don't matter Worlds already solid , the people are already almost blue
And there ain't nuttin' any leader or revolutionary can do
cept' how to Travel through windows and learn how to walk through roofs
Hooves stampede
Top 100 Beatles songs
Rolling Stone magazine list
Does that magazine even matter anymore?
The covers and pages are filled with Reality stars
One sided Politics
I'm a Bum traveler so I slip away cause
I don't care Red States- Blue States
I am color Blind Means nothing To a music Hobo
"Let me introduce my shadow .. Hobo Mike"

Next song to close rehearsal is an all out jam of T for Texas
Tea is for The English
Coffee for The USA
& Fashion mags are losing respect for the photo artist
Behind the Who's Magic Bus lurks Johnny Boy from Mean Streets.
He has a pool cue...look out!

Load up the gear and see ya round the pool hall for a Rock N Roll show that don't exist
As I wonder tonight where is my sweet baby that I miss?
Rocky Raccoon is set to get an Ass whoopin'
Cause Elmer's Fudd is a comin' Strong as glue and he don't look happy........
Just another ordinary Thought that went through a mind in a flash of a second at Band rehearsal 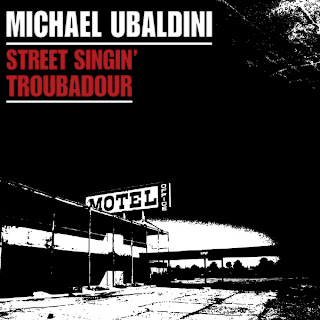 Rick Rubin? Who needs him…

Although new to me, Ubaldini has been going a while. Three of his previous albums have been reviewed on this very site, including a compilation album ‘Empty Bottles and Broken Guitar Strings’.

Whilst not being afraid to record some of his previous work with a band, this album is simple; “a stripped down American folk rebel record”. Just him with an acoustic guitar and harmonica.

With no band backing him, Ubaldini needs to rely primarily on his voice and his lyrics. The guitar playing is fairly basic stuff that all singer songwriters can do, so he’s unlikely to win any awards for it, but he has an engaging style.

After the first five listens I was ready to dismiss this album as yet another singer songwriter who has plenty to say, but wasn’t very good at actually saying it. Then things changed. Like that friend you’ve known for years and really got along with, but slowly they grow in your affections and before you know it you’re in a relationship with them and have fallen hook, line and sinker stone in love with them. And it’s all the better for knowing them as individuals first and a lover second.

“Rock’n’roll rebel, poet, philosopher, hopeless romantic, storyteller, guitar slingin’ outlaw in black” have been used in the past to describe Ubaldini. And they’re all right. The Los Angeles Times described him as being “better than Springsteen at probing the national soul”, which is pushing it somewhat. C’mon!

"I've been doing lots of acoustic gigs. This is different from 'Acoustic Rumble'. I wanted to have lyrics that were not about finger pointing. I don't care about blue/red divisions," said Ubaldini. "I write from the point of being an outsider from all these trendy groups. It's straight," he said. "Like early records from Bob Dylan and the late (Rick Rubin-produced) ones from Johnny Cash. It's my answer to all the overproduced, over-compressed records."

And it is. Neil Diamond has tapped into Rubin for his last two albums after he wanted to go back to basics and he’s a better man for it. Ubaldini doesn’t need Rubin. With tracks like ‘Black Emerald Eyes’, ‘A New Set of Problems’, ‘Ballad of Father Patrick’, ‘Sad Empty Streets of Sunday’, ‘The Sound of the Age’ and ‘Mr Terrorist Man’ he’s more than capable of doing it for himself.

Posted by Michael Ubaldini Ramblings at 12:04 AM No comments: 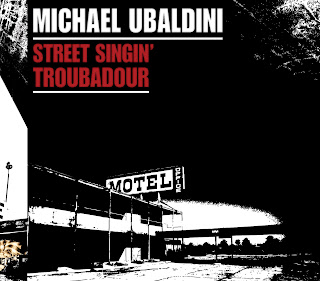 Written By Michael Ubaldini - from the Album:

I was wonderin’ to myself how to achieve world peace

So I turned my ears to the masters, for they were in my reach

The actor was right before me on the TV box

Talkin’ bout his peace group, Being interviewed he talked

He’s a very well read man; he knows how to play the role,

He talked of how he traveled and dabbled with the poor

He’s so righteous that’s what he said so I had to hear some more,

He said he wasn’t Racist; we must be color blind,

Then he talked of red & blue states, Drew a dividing line

He put down the corporate world, then I thought I heard him say

He had to catch his limousine so I went on my way,

I came upon a rally protesting some war

A peace protest with slogans Painted on a door

They started smashing windows that’s when I ducked my head,

Someone said the pledge of aligience; they beat him til he was dead

While they were rioting with police I slipped away unseen,

I guess that’s what a peaceful protest truly means,

I was stopped on a side street by a camera man,

He said he was a filmmaker

I said “I understand”

He nodded back and said he filmed Documentaries

He needed a few things,

Questions answered by me,

I asked him for credentials, he smiled and scratched his chin,

I just kept on A strollin’ some students offered me a ride,

They drove a BMW so I climbed on inside

They were all wealthy & Rich they hung out with the poor,

One of em’ asked me point blank have I ever read Marx?

I said “Harpo was my favorite but Groucho had the spark”

He threw me outta his car said I was an imperialist,

I decided to go out to the Rock n Roll show,

But I couldn’t find one anywhere,

Business was kind of slow

A Canadian man on a corner was lookin’ pretty old

I asked him if the world was really free to rock

On the Eastern block stood a mansion on a hill

With a great big gate made in an ol’ steel mill

The gates they opened up, out came a bearded man,

He looked like a lobbyist with a guitar in his hand,

I could tell he was a Good man

I guess that’s the price of fame,

Intentions start out good but they always end up the same.

I came upon a valley I read all of the signs

So many groups to choose from, so I got in the shortest line

All the organizations were mini countries to themselves

With rules and fees to join

He wore a derby hat I said “Mr. If ya’ can-teach me how to stop all wars Racism, poverty abound,

Cause people are talkin’ self righteously on podiums I’ve found”

He said “There will never be world peace until the day you die,

I said “Thanks’ he said “you’re welcome”

To world peace I said “goodbye”

Posted by Michael Ubaldini Ramblings at 12:03 AM No comments: